This is the second in NBYT’s series of staff profiles. Nicki LaPorte is co-director of—and a performer in—Romeo and Juliet, which plays this coming weekend. 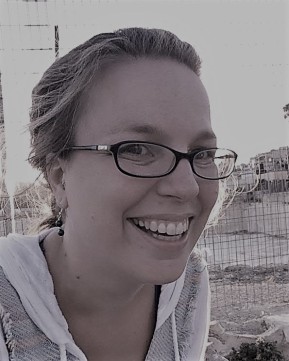 Nicki is a graduate of Central Connecticut State University with a double major in Educational Theater and U.S. History. During the day she works with New Britain Public Schools in special education, and in the afternoon and evenings Nicki brings a love of the performing arts to children and teens in acting classes and shows. Nicki has been with NBYT since January 2011, where she has taught, directed, performed, stage managed, and designed and built costumes. She has also taught theater programs through East Hartford Public Schools, Hartford Performs, Performing Arts Programs, and the Gateway Project in Huntingdon, Massachusetts. During the summer of 2016, Nicki traveled to The Freedom Theater in the West Bank of Palestine to work with children living in the Jenin refugee camp. Nicki has been a company member with Elmwood Productions as a puppeteer since early 2016, has performed at New Britain’s Hole in the Wall Theater in The Impracticality of Modern-day Mastodons (mastodon puppeteer) and Rocky Horror Show (Transylvanian ensemble), has performed at The Ridgefield Playhouse and Fairfield Theater Company in Dr. Phineas’ Magical Emporium (Queen and Princess), and performed in several main stage and student directed shows during her time at CCSU.

How did you first get involved in theater?

I first got involved in theater in preschool. I was a loud and creative child so my parents had me audition for a preschool that focused on the arts. As I got older I did plays through community organizations in the summer and winter as well as in school. I haven’t stopped since.

What’s the best thing about working at NBYT?

The best part of working at NBYT is meeting and inspiring all the young actors. I burst with excitement watching them grow and learn and enjoy what we are doing in classes, after school, and in productions.

Do you have a favorite puppet?

My favorite puppet is any mastodon type: so, Snuffleupagus. He was so big and I loved watching him on TV as a kid. Then, as an adult at Hole in the Wall Theater I was so excited to be cast as the better half (the back half) of the giant mastodon in the world premier of The Impracticality of Modern-Day Mastodons. That production got me other paying puppetry gigs, so that was really great.

If you were an ice cream flavor, what would you be?

I would be vegan pumpkin soft serve from Divine Treasures, for a few reasons. One, its orange, my favorite color. Two, it’s vegan like me. And three it’s only available in limited quantities. (It’s fun to be in high demand!) And I guess I would be soft serve because even though I pretend to be tough, I’m really soft and sensitive.

What advice do you have for kids interested in theater?

My advice for kids interested in theater is to find a great community-based theater and try it out. Take classes or join a production. If you don’t get a good part in your first production, don’t worry—it took me years until I realized my full potential and started to get major roles. But above all: have fun because theater is play!