Design planning begins as soon as a director and a producer read a play. When we knew we’d be putting Santa’s Workshop on stage—and especially after we knew there would be nearly fifty young actors in it—we knew that it would have to be bold, bright and BIG!

Some Christmas specials (rhymes with “Udolph”) have made the famed North Pole location minimalist, monochromatic and mid-century modern. That wouldn’t do for us!

Most of the time, a set designer creates a set design after reading the play and talking to the director. At NBYT, Artistic Director David Sousa and Executive Producer Darren Farrington have been designing most of the sets themselves. We’re not about to give too much away by posting pictures of the finished set, but here’s a look at the design.

See those gift boxes? They’re eight feet tall! The red and green fabric panels in back—in place of a backdrop—are fifteen feet tall. The set and prop design also includes over 150 wrapped packages on stage! They were wrapped by parent volunteers who also donated the boxes, wrapping paper and tape. The action in I’m Getting Nothin’ for Christmas takes place in more than one location; it starts at a mall before moving on to a few rooms in Santa’s Workshop at the North Pole. Because the main stage at Trinity-on-Main Performance Center doesn’t have room for easy set changes or have any offstage storage for set pieces,  this is more of an abstract set—meaning it represents several different locations.

The costumes for Santa’s elves and reindeer are bright and beautiful too! For those, NBYT worked with costume designer Nightwing Whitehead. She’s done an absolutely fantastic job on a limited budget—especially with such a large cast! We’re not going to give away too much here either, but here’s a look at two of our costume racks. 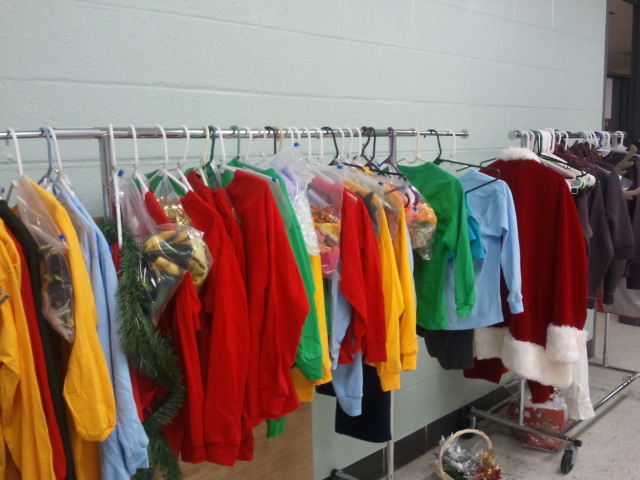 Very often, elves are dressed uniformly in…well, uniforms. The elves in I’m Getting Nothin’ for Christmas are dressed a bit similarly, but each one of them has a unique look and personality too! And don’t forget that this play also has a pirate and a ninja in it. And is that a red suit for the Big Guy?

I’m Getting Nothin’ for Christmas plays at Trinity-on-Main Performance Center on December 9, 10 and 11. More information is available on the NBYT website at www.nbyt.org, and tickets can be purchased online or by calling 860-515-8115. All major credit cards are accepted.

"Making of...", design, I'm Getting Nothin' for Christmas

NBYT The Making of I’M GETTING NOTHIN’ FOR CHRISTMAS: Set, Prop and Costume Design
%d bloggers like this: