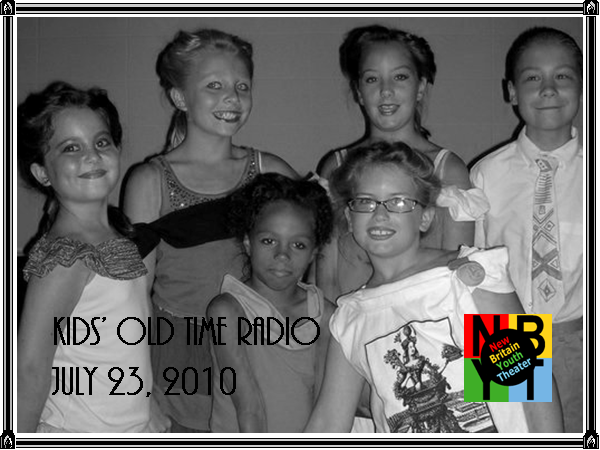 NBYT debuted this summer with a four-week, half-day Kids on Stage program which culminated in a performance of radio plays from the 1930s and 40s titled Kids’ Old Time Radio. The radio dramas and comedies included Flash Gordon, Five Minute Mysteries, Fibber McGee and Molly, and Baby Snooks. Children voiced the characters, and also created sound effects using objects they themselves had selected. The young performers also danced to In the Mood by the Glenn Miller Orchestra with swing choreography taught by Adrienne Marie Cotter. David Sousa directed the production, and also ran the four-week program along with Denise Clapsaddle. Kids on Stage also included games, crafts, and activities from the Depression and World War II eras, as well as daily warm-ups and theater games.

Along with the Kids on Stage program at Trinity-on-Main performance space, NBYT staff led three other programs this summer. Seventy-four summer campers from the New Britain YWCA visited hour-long drama classes led by David Sousa and Darren Farrington. About forty children, ages 3 to 6, at a daycare center in Wallingford staged a Dr. Seuss story with Darren. And fifty children, from preschool through sixth grade, in a summer program at a Newington school performed Shakespeare and Seuss also directed by Darren. That program included a reading of Horton Hears a Who!, an excerpt from A Midsummer Night’s Dream, and an adaptation of Twelfth Night in Seuss-type poetry—all tied together by the story of a troupe of actors performing Shakespeare and Seuss.

Altogether, NBYT and its staff reached over 170 kids in its first summer alone! Not a bad start!